At the February meeting of the DCA in Monyash, shortly after discussing the air in Slaley Sough with Mike Higgins, I was asked by Adam Russell if I could take a trip in there some time, and sample the air in Thunder Shaft, a 151ft deep winze which lies just off the main cartgate in the Flixen Rake section of Slaley Sough. Getting information about Slaley Sough isn't easy. The description of the approach in Caves of the Peak District is vague, and a six-figure grid reference doesn't help much in the thorny jungles that cling to the high slopes of Via Gellia! But I managed to glean some useful information from the Winster Cavers website, and got some helpful advice from Adam himself.

Having recently had a problem with DCRO's CO2 meter, I was on the phone to Dan Murray, one of my less regular Tuesday night cavers, who happens to be an expert on underground atmospheric problems, and the subject of Slaley Sough came up in conversation. As we were both scheduled to attend a meeting at Matlock Fire Station with the DFRS Rope Rescue Unit on 21 March, we agreed that we might venture into the Sough afterwards. This was a good idea, as Dan had been into the mine a couple of times in the past. So, after a very interesting discussion and exchange of ideas between the Rope Rescue lads and a group from DCRO, a small party of five (we had been joined by Bill Whitehouse, Rick Lewthwaite and Jess Stirrups) drove in convoy up the Via Gellia, and parked at the lay-by just below Good Luck Mine.

If I knew then what I know now, I might have taken the public footpath (just before Tufa Cottage) up the Dunsley Springs, and then followed the fields along the top until I met the second stream, and then descended to the Sough. But we opted to walk down the A5012 until after Tufa Cottage, and then headed up the vertical jungle after the next stream. Another (easier) option would have been to continue along the A5012 until just after the impressive entrance to the Bonsall Lees Level, and then climb diagonally up the slope on the left. I'll know better next time!

But, eventually, we found our entrance, or rather Jess did, and, after re-grouping and turning on no less than five different gas meters, we headed into the mine. The entrance is low, and well decorated with fox muck, and leads quickly to a low passage with a floor of gloopy mud about a foot deep. Different sized shotholes are evident on the walls, some less than an inch in width, possibly giving an indication of the age of the passage, which is marked as "Old Man's Crosscut" on Flindell's survey. This muddy passage continues like this for twenty metres or so to a dry section which is still an awkward height and goes on for around 150m to a T junction with a standing height passage and a good draught of air.

To the right the passage leads to a 50ft winze followed by a crawl into the continuation of Great Rake. The main way on is left, along a pleasant passage with evidence of tramming (sleepers) and soot marks on the walls. Shortly after a high raise or stope, with a passage evident above, the main passage swings right, leaving a low crawl to continue into the Flixen Rake. Following the main passage, and just after a widened chamber, a mound of toadstone is met at a large junction, and the right hand passage gives immediate access to Thunder Shaft, a 151ft winze and our objective.

It's not generally the done thing to abseil into a blind shaft where CO2 is likely to have collected, well not without a B.A. set anyway, so Rick had brought along a cunning piece of technology, in the shape of his fishing rod, to enable us to safely measure the air quality in the shaft. The first meter we lowered went into the flooded section at the foot of the winze and gave us an indication of the depth (number of turns on the reel). We could then lowere other meters to an accurate depth and deduce the maximum reading after retrieval. In all, we lowered three meters into the shaft, and concluded that the oxygen content of the air in the shaft was 20.9% (identical to the surface) and the carbon dioxide content was 0.10% (0.06% higher than on the surface). So no problems with foul air on our visit. 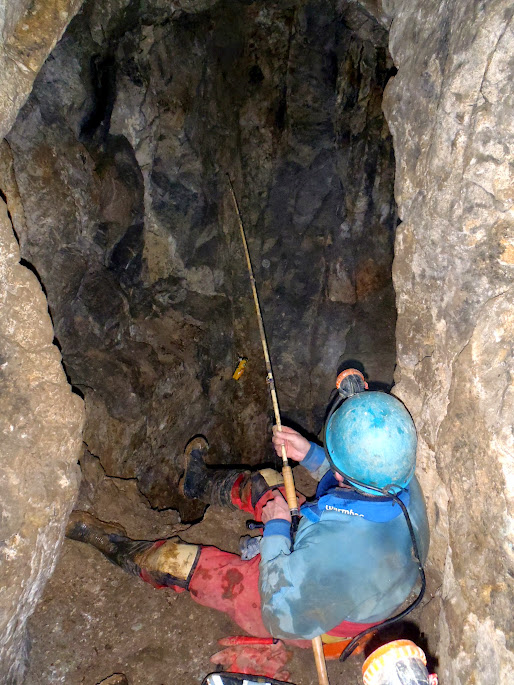 The short passage leading to Thunder Shaft had a series of stemple slots which seemed to be closer to the ceiling than you would expect for tramming, and we wondered whether there might have been a rag pump or similar on the shaft, and the stemples supported troughing to carry the water away. Also this would be the only way the passage might have acted as a sough. And maybe the chamber we had passed just before the junction had been widened to hold something that might use the ducted water - buddling?

Finally we crawled over the toadstone heap back at the junction and followed the large passage beyond to its conclusion, passing beneath at least one more raise / stope. No evidence of lead was seen in the mine, although there was plenty of large calcite crystal and barites. On emerging from the sough, we followed a rough way down through the woods, alongside a small stream, to the main Via Gellia road, and paid a visit to the Bonsall Lees Level before returning to our vehicles.

Via Gellia is an interesting area with much evidence of mining. It's out on the edge of my normal caving haunts, so a lot of it is either unknown or very new to me, and I am grateful to Adam for giving us the excuse for such an interesting visit.