Last Wednesday evening, after spending most of the day with a group from Macclesfield in Mouldridge Mine, and with my DCA "Gasman" hat on, I decided that, having only just recently measured the air quality in Lathkill Head Cave, and Lathkill Head Upper Entrance, it might be a good idea to do the same in the only other entrance - Garden Path. I was prompted to do this by my friend, Alan Walker, who you may know as the manager of Poole's Cavern (or as just another caver) - Alan said he fancied a photographic trip down there, and could I arrange it, so I got onto Karen and Bob, and was surprised to find that it was all sorted very quickly. 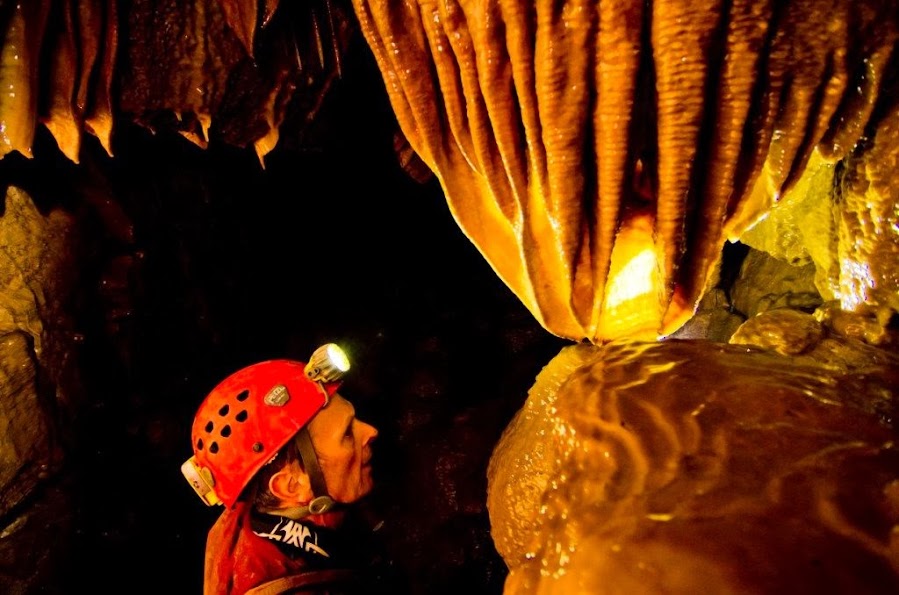 For those who don't know this cavern, it's part of the Lathkill System that was pushed in the early 90s by Ben, Moose and Co and the Garden Path series was found as Dream Time and Black Rock Sands - a beautiful (big) cavern at the end of the gnarly Tiger 5 crawl. The aven was climbed, and a new entrance excavated, but the formations are such that it was decided to strictly restrict access, and you need a "scientific reason" to be in there. There's also a strict limit of four in the party, and in our case the four included Alan, Chris Moorcroft and Peter Dell, as well as myself.

There used to be a series of old British Railways signal ladders leading down to the cave, but this has all been replaced by P hangers and SRT - although two slowly rotting wooden platforms remain from the early days. One of these days, these will be removed, and the trip will be much better for it.

It is also possible to reach the same point (without any access restrictions) from Lathkill Upper Entrance, but only when the stream is dry - the whole thing is sumped at the moment, as you might imagine, and it will be next April or May before Tiger 5 will be open again. A trip into Tiger 4 from Lathkiller Hall in the Upper Entrance Series is fairly straight forward as far as the Emporium, but from there to Hope Show is more problematic, and the last time I tried to find my way through with Keith Joules, we lost our way. Tiger 4 ends at Hope Show, but that's where Tiger 5 starts, going past the Northern Lights series, and its connection to Ricklow Cave vis the Beresford Link, eventually getting to Black Rock Sands and Dream Time. But all this is currently waterlogged.

Ben didn't stop at Dream Time, there's also Tigers 6 and 7, the latter with its ominous Rolling Thunder crawl. But that's all waiting for future explorers.

All photos courtesy of Alan Walker. Above - one of the many "bacon" curtains in the series. Below looking back across the big chamber at the foot of the entrance pitches. 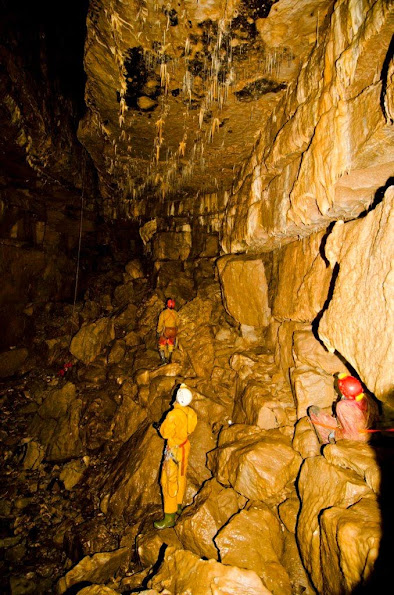